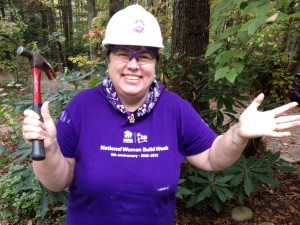 Join the FlyLady and Habitat for Humanity

The FlyLady and her fans have stepped up to do their part in ending poverty housing conditions in Transylvania, NC. Their goal is to construct 1 new, affordable, decent house for a family in the area.  Become a part of this transformative event!  Help them give a hand up, not a hand out, to families in need. We are so excited about this! Every little bit helps!

BREVARD, NORTH CAROLINA  – In February 2012, Transylvania Habitat for Humanity made its first foray into social media when it launched its Facebook page. This week, with the help of Brevard resident and Habitat for Humanity International celebrity spokesperson Marla Cilley – aka “The FlyLady” – and a team of Habitat for Humanity software developers based in Atlanta, the western North Carolina Habitat chapter launches a social media-based fund-raising effort that is hoped will raise thousands of dollars for Habitat in the coming years. FlyLady Build Project is an online fund-raising campaign, championed by Cilley (home organization expert and best-selling author), with the objective of raising enough money to build one Habitat house in Transylvania County. “My hope is this will be the first of many houses we build across the country,” Cilley says. Indeed, long-term objectives of FlyLady Build Project are to help other local Habitat affiliates in the United States similarly raise money to build houses. “But today, I’m excited to get to work and watch the walls of this very first house go up, right here in my own hometown of Brevard,” Cilley adds.

The online component of  FlyLady Build Project  media platforms, including Facebook, Twitter and Pinterest. Visitors to the online donation page have the ability to post comments, view videos, share activity with friends, create fund-raising teams, and make donations.  The first phase of the project, kicking off today, is a 60-day campaign to raise $111,000, the amount needed to build one house in Transylvania County. “I hope we can build a whole subdivision of houses,” says Cilley with enthusiasm. “With support from our community here, and the our caring community of FlyBabies around the world, I know we’ll succeed.”

In June 2012, Transylvania Habitat for Humanity celebrated the grand opening of its new ReStore thrift store at 690 Ecusta Road in Pisgah Forest. In October 2012, the chapter unveiled their completely redesigned web site www.transylvaniahabitat.org “It’s been a busy and blessed year for us,” says Don Campbell, Transylvania Habitat Board President. “We’re looking forward to next year, and very excited about the FlyLady Build Project launch. It’s yet another tool to help us raise funds to help provide decent, affordable housing for deserving families in our community.” Since 1984, Transylvania Habitat for Humanity has provided 53 partner families with homes that are purchased through interest-free mortgages.

To join in the FlyLady Build Project effort or make a donation, go to  www.share.habitat.org/flyladybuildproject  or visit  www.transylvaniahabitat.org  or  www.flylady.net.

About Transylvania Habitat for Humanity